Posted by AM Lazer/Blog, Copiers//

You can find copiers in every office and almost every home across the nation, and many of us take them for granted. Making copies wasn’t always as easy as pressing a button, in fact not that long ago people were making all copies by hand. We’re going to go over the interesting history of the photocopier and see how it has evolved over time into an invention that has changed the way we live.

The timeline of the photocopier begins in the year 1938 in New York. Chester Carlson was a patent attorney whose job required him to hand copy large amounts of documents on a regular basis. Carlson was arthritic and soon found this task to be extremely tiresome and painful. He decided there had to be a better way to get the job done. 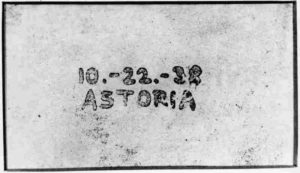 Carlson began to work on his own invention and created his first ever photocopy using a zinc plate sulfur, and read “10.-28.-38 ASTORIA.” The date of when it was made, and the town Carlson lived in at the time. Carlson continued to work on it and eventually created the first commercial photocopier, which weighed over 650 pounds and was “prone to spontaneous combustion.”

The second it hit the market it was a huge success. A couple years later when the Battelle Memorial Institute of Columbus, Ohio reached out to him about his invention and eventually bought the patent from him.

After a few years of working and improving the original model, a company called Haloid Corporation bought it from Battelle.

Two years later the product was ready to hit the market, but before it did, Haloid decided to rename the technology which at the time was called “electrophotography” because he felt it was so difficult to say and would not catch on. Haloid renamed it to “xerography” which means “dry writing” in Greek. The first machine was then named the Xerox Model A, and Haloid renamed themselves to the Xerox Corporation.

The Xerox machine was extremely popular from the second it hit the market, and soon other companies wanted to join in on the success and started developing their own models.

The photocopy machine continued to evolve. More and more advancements were made, copying times decreased, and companies began producing ink and toner in greater quantities making it more affordable to the public.

Color copiers were introduced to the public. At first, the government was concerned about color copying thinking counterfeit money may become an issue. This triggered a movement in governments across the world changing their money by incorporating anti-counterfeiting elements like watermarks and holograms.

The first laser printer was designed and was later released to the market in 1976.  Laser copiers use a digital printing process involving lasers that produce high-quality text and graphics, much better than any machine around at the time.

Inkjet printers hit the market and began to get popular. Like laser printers, inkjet printers/copiers also use a digital printing process but does it by dropping spots of ink onto the paper.

Over the past 50 years, copiers have continued to advance tremendously, we even have 3D Printers now! But we’ll save that story for another time. Today, inkjet and laser copiers and printers still dominate the market, and both have their own unique strengths and weaknesses.  We hope you enjoyed learning about the interesting history of the photocopier. If you’re in the market for a new copier or have questions about one you already have please feel free to reach out to us! Give us a call at (866) 922-9003 or contact us online.

About the Author: AM Lazer